While representing Source Point Training at the Salt Lake City Chamber of Commerce Expo recently, I had the opportunity to hear Mark Eaton speak at the luncheon.  He is an NBA all-star who played with the Utah Jazz for 12 years.

In high school and after, he HATED this question, “Do you play basketball?”  You see, he was 7’4″ tall and did not!  He had a terrible experience on the high school basketball team and spent most of his time on the bench. He remembers being mercilessly teased about his height – “Lurch” etc. – and decided to become an auto mechanic.  Working in an auto store in Southern CA, the inevitable question was always posed when a coach named Tom Lubin approached him in the shop NO LESS than 15 times; assuring Mark that he would teach him everything he needed to know in order to be a player, IF he was willing to do the work.  So, he agreed, went to Cypress Junior College and then to UCLA and the rest is history:

Jazz Coach Frank Layden would later explain his choice by quoting Red Auerbach’s old Eaton Basketball axiom, “you can’t teach height”.  Although he was not a significant offensive contributor, the Jazz relied heavily on Eaton for his shot-blocking, rebounding, and occasional “tippy toe” dunks.  With the emergence of superstars Karl Malone and John Stockton, the Jazz became one of the best teams in the NBA.  Eaton’s stifling defense was a major factor in Utah’s success.  He continued to rank among NBA leaders in blocked shots, leading the

league in 1986-87 and 1987-88. In 1988-89, he averaged 10.3 rebounds per game (seventh in the NBA) and 3.84 blocks per game (second behind Golden State’s Manute Bol). He was named NBA Defensive Player of the Year for the second time in his career, and was also named to the NBA All-Defensive First Team (for the third time in his career). In addition, he was chosen to play in the 1989 NBA All-Star Game, joining teammates Malone and Stockton on the Western Conference team.

To honor his contributions to the team, the Utah Jazz retired Eaton’s number 53 during the 1995-1996 regular season. 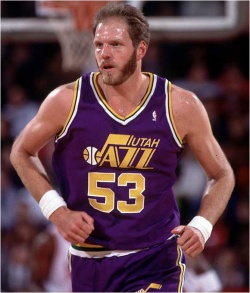 As a result of his experiences, he has created a “The 4 Commitments of a Winning Team” whether you are on or off the court.

1.  Know your job    Do what you do best.  He realized that he was best underneath the basket blocking shots, never being fast enough to keep up with other players, and claimed his “home” where others could count on him.  What are you excellent at?  What is your most valuable character trait?

2.  Do what you are asked to do on the court; it’s called “executing the play.”  In order to go from good to great, you must execute exactly as you are told by your coach, as they can see the whole and further than you can and have a game plan.  As human beings, we don’t want to look like we don’t know what we’re doing AND we don’t like more work.  He worked out 5-6 hours a day, because his coach told him to, when others only did 1-2 hours.  Let go of what YOU think works and listen to others.  Have the courage to ask and the discipline to do it.  What do your clients want and when did you last ask?

3.   Make people look good   nobody likes a ball hog! Pass the ball. This commitment is all about cooperation and collaboration.  On a team, people have different ways of contributing. Mark Eaton was a defensive player, which allowed those scoring free reign to “go for it.” How focused are you at making other’s look good?

4.   Protect others in order to work most effectively together, everyone on the team must truly feel safe.  In order to swing out, people need to know that you have their back.  Trust is essential on a team; knowing that members are there for each other, care for them and their well-being, and are loyal to each other.  This is transcending your own self-interest in order to “change the world.”

What struck me was the obvious assumption that he was “naturally” gifted, given his height, and yet he had to work harder than most in order to be great!  It reminded me that any of us has what it takes to have our dreams come true.  More importantly, we can all be a Tom Lubin for others, seeing what they don’t see about themselves and take a powerful stand to challenge them to their greatness and excellence.

Accountability: the Key Ingredient of Leadership
How Choice Creates Great Leaders
Honoring Agreements Begins from Within
Trust is the Foundation of All Relationships
Taking a Stand for Living the Life You Love!
Leading with Purpose and Managing Priorities
Distinctions between "life coaching" and "performance coaching”
On Gratitude
0 replies

A Goal Without a Vision is Pointless Greetings!
Scroll to top