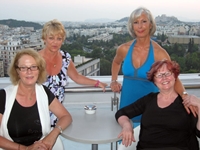 Taking a vacation to Athens August 5, 2010 was declared over a year before the date with Deana Riley, Mary Golly and Lou Dozier. Little did I know at the time the changes that would occur from that declaration until the date of departure. As we have shared with the launch of Source Point Training, we have been busy to say the least.

Oh, I certainly had a conversation with myself about being away from Source Point Training, the team, and all of the exciting preparations for our upcoming trainings, and just taking some down time. But the opportunity to celebrate my friend Deana Riley’s passage to the big 50, and being with my buddy (and now business partner) Lou, opened up many new possibilities. I quickly realized that Greece was the place to be.

And it was wonderful to have Mary Golly, Senior Flight Attendant for US Airways, take us on a tour of her homeland and so wonderful to have her speak for us. She was the ideal travel planner and guide. We even discussed with her a new business opportunity as we were sitting on the steps below the Parthenon one afternoon having a late lunch of Greek Salad (soon to become a daily staple). We explored the opportunity that she should consider starting a business called Gollyvers Travels.

There is something very humbling about stepping into a country with such a history — again reminding us that we are a mere blip on the screen of life in the universe and how important it is to enjoy each moment. Inspired by the ruins of the Parthenon and the Acropolis, we found ourselves in many exciting and curious conversations with each other. We were not exactly the MaMa Mia tribe from the movie, but there were some similarities.

As always, there is learning from any real life experience. So once we had left Athens and took the boat to the famous island of Mykonos to stay with Mary’s cousin at her house, we were all in a new place of discovery. This would be Mary’s first visit to her cousin’s house on the island. We stepped off the ferry and looked around for our rental car pick up — no car. So we reviewed paperwork and began to realize we were at the “New” port and our car most probably would be at the “Old” port. We got on the local bus and soon found our car. Mary’s cousin came to guide us up the hill to the top of the island to her house. Well, this is NO tropical island as we have seen. But rather arid with MANY white houses with blue doors and shutters, perched atop hills all over the country side. So, up the hill we climbed in our little Ford Focus following Mary’s cousin driving confidently over the narrow, winding and bumpy hill, and all packed down with ladies luggage of four.

After lunch and off-loading our baggage, we hopped back into our little car to explore the village of Mykonos. We sat and watched the beginning of the sun set over the harbor, as well as all the tourists, in the evening heat, explore the many gift shops. Once again, as we had from the beginning, we acknowledged ourselves for choosing to take this time to be together and be renewed, as we shared and listened to where each of us were.

As the sun set, we left the village and began our trip back to Mary’s cousin’s house perched atop the hills. We were looking forward to dinner with Mary’s cousin and friends celebrating a birthday. We were confident as we began to see landmarks on our way back that reminded us we were doing a great job of navigating the new terrain in the dark countryside. Up and down the narrow bumpy road with little hills and valleys, we traveled until we came to THE HILL. This was one that we had remembered from the afternoon and we had been warned about. The navigation, the preparation and the ultimate success of getting home depended on navigating this final steep hill. As Mary accelerated the car, I sat in the front shotgun seat excitedly encouraging her to “throttle” it. As we were just about to the crest of the hill, we began to stall out losing ground and sliding backwards. We stopped and set the break. With Mary and I working together, Mary downshifted and slowly accelerated while I released the emergency brake, with the hope of gaining traction AND momentum all at the same time to get us to the top. Once again, we stalled and began to slide. This is when we looked at choices and possibilities. Well, we did not have the luggage from the afternoon so we knew we were lighter and we knew we had done it before so we believed it was possible to get to the top. So what; NOW what??!!! Mary and I looked to the back seat where Lou and Deana sat with apprehensive faces. We must lighten our load. “Deana, Lou out. Start walking to the top,” I said, “And stay to the side!” We didn’t want to injure our compadres in the drive to the top.

Once again – set the break – downshifted – accelerated – released the break – stall – slide. AGAIN, set break – downshifted – accelerate – released break – stall – slide. Looking up, we see a large Mercedes SUV coming down the hill. He sees our distress and sits and watches. Deana of course goes to the man driving and enrolls him in helping us. We are clear at this point that we do not have the skills to get our little Ford Focus up the hill without someone with greater skills and knowledge of this hill.

Mary stepped out and turned the wheel over to him and got in the back seat. I, of course, do not have the legs to climb this hill so as the last passenger left in the car; I sat quietly and wished for his success. After two attempts and some burning of rubber on the road, we bounced forward with a great force and began to gain traction. We got to a flat spot and immediately felt a sense of relief. Deana and Lou jumped into the car of our savior – we did not trust ourselves one more time to climb this hill. And now feeling completely disoriented from the landmarks we relied on Deana and Lou as the foot soldiers to point out in the dark where the house was at the top of the hill. We continued to climb with our pilot driving confidently.

THE MORAL TO THE STORY

When in uncharted territory, be sure that you have your landmarks to guide you. Always return before sundown.

Take off your sunglasses after dark. It will help you be a better navigator.

Know when to accelerate and plan for the hills ahead. Understand that when it is time to take a hill, planning and powering up is essential to reach the top.

When in breakdown, work as a team and use all your resources.

Trust the universe to provide the resources required at the most difficult time.

Be willing to give up your seat and lighten the load for others to move forward.

Acknowledge and celebrate successes when you reach the top and remember all that you have learned on the climb.

Eat- Pray – Love as the book shares. Once we reached the top and had shared our story, we met many new friends who were excited to hear about our adventures. And while Lou was sitting next to the honored birthday guest she was presented with his worry beads that he had used for over 20 years and which had been given to him as a gift. Now we will have even more resources to use in future challenges.

And who was the most excited about seeing in the daylight what we had transcended the night before, Mary and Deana. They were ready to hike the hill up and down, seeing in the light of day that it was not that daunting and all we needed was to have been able to see more clearly (sunglasses off!) where we were and to anticipate the need to accelerate and keep the peddle down.

On any climb in life, I will always remember these principles as they are a metaphor in dealing with many different and new situations.

What Are You Committed To? – How to Turn Your Wish List into Reality

Commitment is such a serious word. Do you ever notice yourself getting a little on edge when someone uses “that word?” Does it make you a little nervous? Does it give you a feeling of dread?

The third leg of the Three-Legged Stool to Building Solid Relationships, taught in Certified Relationship Coach Training, is “commitment.” We have all probably experienced some level of commitment, from marriage vows, to work-related contracts, to “promises” we’ve made. So what does “commitment” really mean and how does it truly show-up in our lives and relationships?

A first question to explore is “What am I committed to?” which is different than saying “What do I want?” For many people, it’s pretty easy to make a wish list of “our wants.” That list may serve as a nice and gentle reminder, but that’s all it is: a list.

Here’s an example: If you are an Amazon.com user, you may have an online “Wish List” noting your “wants.” Obviously, they remain on that “wish list” until you or someone actually purchases the product, and makes it a reality for you and it arrives at your doorstep. That commitment is making a purchase, which results in you receiving what you want.

Only when we move from wants and wishes to a commitment (in the Amazon example, a purchase), do we begin to see and experience real results. We may desire or want many things but only from commitment will we create what we say we want.

Commitment is getting clear about intention and is a promise to honor our word, to ourselves and to others. It also requires seeing and understanding what is underneath our beliefs, attitudes and assumptions that may get in the way when we’re reluctant to commit, or when we do commit and break our word. The good news is (we believe) that all humans are born whole and complete; with qualities and “ways of being” that allows us to be our authentic selves. Unfortunately, we’ve learned ways to unconsciously begin to create beliefs about who we are and who we are not. Those beliefs create patterns that impact how we see and experience commitment. Understanding these patterns can help us begin to do things differently, especially around commitment.

Broken promises or commitments in relationships are well-known as a path to breaking trust, which impacts communication (the two other legs of the stool). Breaking the same promises or commitments with ourselves is even more critical. If we are not willing to keep commitments with ourselves, (eating healthy, arriving on time, adjusting an attitude, exercising on schedule, etc.), then how difficult will it be to keep our word with others, no matter the relationship?

In Certified Relationship Coach Training, you will learn to experience “commitment” in a new way that leaves you on the edge of excitement, not dread. You will explore more about the Three-Legged Stool and learn tools and skills that will help you coach relationships, as well as grow in your relationship with yourself. Like Lou said last week, knowing more about commitment, trust and communication will keep your stool stable, and not wobbly.